Honeywell has a large suite of generators, ranging from 800 Watt Inverter Generators to 7500 Watt Traditional Portable Generators to full home backup generators to commercial generators. They cover the whole gamut. In this article, we’ll take a look at some of the popular portable honeywell generators, both inverter and traditional.

Inverter generators are ideal for campers and anyone who needs to transport a power source, e.g. to a tailgate party or to an event where other sources are not available. Inverters tend to be very lightweight and compact. The smaller ones can be easily carried by one person. They are also fuel efficient and safe to use with sensitive electronics, like laptops and smartphones. Another advantage of inverter generators is their quietness compared to traditional generators due in part to a fully enclosed casing.

The Honeywell 6066 is an inverter model that runs at 2000 Watts (2200 Surge Watts) and is gas powered. It has all the features described above. An important feature that contributes both to its quietness and fuel efficiency is called “Eco Mode”. It adjusts engine speed according to the load. When the demand is low, it will run slower and quieter using less fuel; only when the demand increases will it speed up to meet the need. This is a key advantage over traditional generators.

At 50% load, this generator can run 4.7 hours on a full tank of 0.9 gallons. It weights 52 lbs. making it relatively easy to transport. The 6066 has other valuable features! It will shut down automatically when the oil gets low or if the generator is overloaded; this is to provide secure operation and protect the generator. Finally, with charging cables, the generator can be used to charge DC batteries, a very handy feature when you need to jump start your car!

This honeywell generator has some great features; it’s great on gas, quiet and portable. One complaint is that it can be difficult to start, requiring more strength than expected to pull the recoil cord fast enough to start it. Also, oil leaks are not uncommon.

Also, the Honeywell 6066 model is not for sale in California, as it is not CARB compliant. This means that it does not meet the air pollution standards set by CARB (California Air Resource Board). CARB is responsible for maintaining a high level of air quality in California. While California is the only state that has a regulatory agency like this, it has set a standard that can be followed by others. Comparable examples of CARB compliant portable inverter generators are the Yamaha EF2000iS and the Honda EU2000i.

For smaller power needs, you may also want to consider the following inverter generators. They all share the features of being compact, quiet, fuel-efficient and safe for electronics. 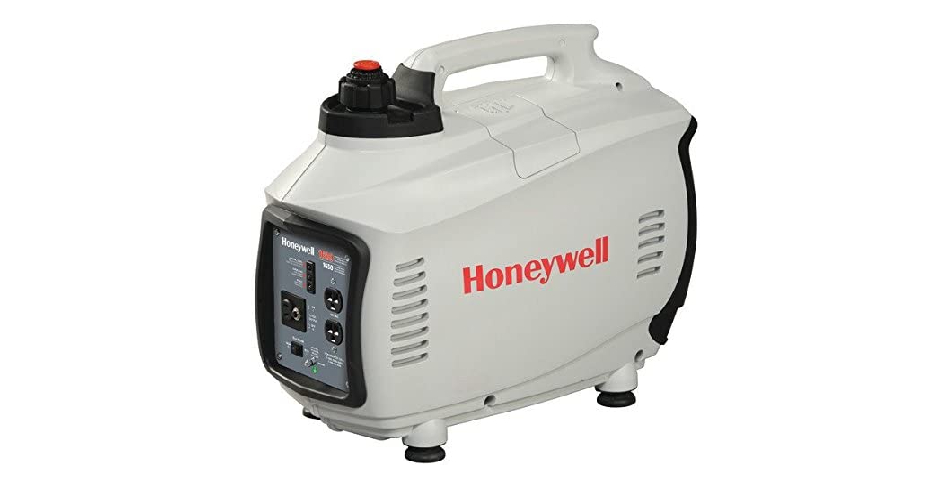 The 6065 is rated at 1600 Watts continuous power and 1650 Surge or Starting Watts. Like the other inverter models reviewed here, it is also not CARB-Compliant. It has fuel capacity of 0.8 gallons providing 4.9 hours of continuous runtime at 50% load.

These Honeywell inverter models are less expensive than other brands having similar features and power output, which is something to consider when looking for your portable generator. It may not be worthwhile to get a higher end brand depending on your circumstances. They each have a 2-year residential warranty.

On the traditional side, we will find higher power generators ranging from 3250 to 7500 Watts. These honeywell generators are ideal for power tools and for home backup power in emergencies, as they can power much more in your home. In this family of generators, we’ll take a look at Model 6038, Honeywell’s 6500 Watt Portable Generator. This generator is rated for 6500 Watts, meaning it can power a 6500 Watt load continuously, but it can provide surge power output of 8125 Watts! This is enough to power a number of appliances, including a refrigerator (1000 to 2000 Watts), a window air conditioner (as low as 450 Watts), electric clothes dryer (5000 – 6000 Watts) or an electric water heater (up to 6000 Watts).

This generator is much heavier than the compact inverter generator we looked at above at 203 lbs., but it comes with 10 inch heavy duty wheels and high-leverage handles (which fold for easy storage) for portability. They will also be much louder. This generator is also not CARB-compliant and may not be sold in California.

With a fuel capacity of 5.8 gallons, it will run for 8.8 hours at 50% capacity, which is very good performance in an emergency. A valuable feature is the automatic shut-down upon detecting low oil level; this will protect the engine.

Depending on your power requirements, you may want to consider the following traditional portable generators also. They all have three-year residential warranties. 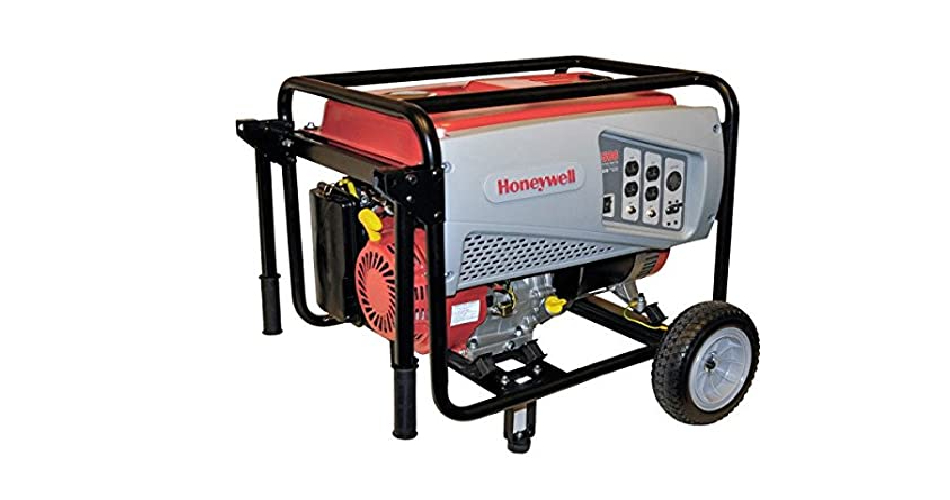 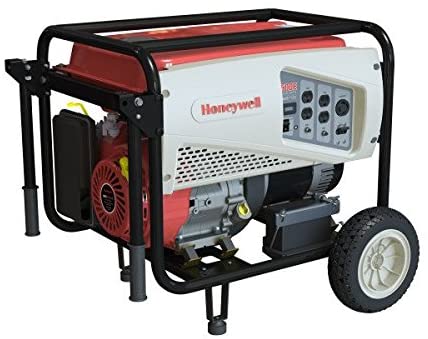 This model also runs at 5500 Watts with starting or surge power of 6875 Watts like the two models above. The 6037 is different in that it has a convenient push-button electric start! It is also 49-State and CSA certified. It is not CARB-compliant.

These two models run at 7500 Watts and surge power of 9375 Watts. They are the largest models of Honeywells portable generators. They both have the push-button electric start feature! The 6039 is not CARB-Compliant , while the 6152 is and can be purchased in California. Also, like the 6500 Watt generator described earlier, these models come with heavy duty wheels and fold-down handles for easy transport and storage. Engines are protected by automatic shutdown when low oil levels are detected. Finally, they contain 5.8 gallon fuel tanks, which provide 8.1 hours of continuous power at 50% load.

There are so many options for portable generators to meet your recreational and emergency needs. Inverter generators are ideal for situations requiring low noise levels or when powering sensitive electronics is a concern. They are much more compact and light making them perfect for transporting to tailgate parties and for camping. The larger traditional models may make more sense as home backup generators. They are typically loud and large. Honeywell provides this whole range of options and will likely have the one that’s right for you!

A solar powered generator converts solar energy into electricity for running various kinds of gadgets in your home or office like lights, computers, or smartphones. The solar portable generators...

Continue Reading
link to How to Choose the Best Beach Wagon

If you’re planning to head out to the beach you want to be able to enjoy yourself, right? You want to have fun and take along your lunch or maybe your towels and some toys? Maybe you just want a...